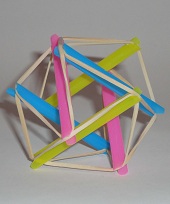 The expanded octahedron (nearly icosahedron) offers an illustration of the three dimensions, height/vertical, width/horizontal, and depth/sagittal, expanded into a voluminous polyhedron. This model demonstrates the principle of struts suspended within tensile forces and an interior open spaciousness without a tightly held core.

While the rubber band model is not ideal, i.e. the tensile forces do not get stiffer with increased loading, it is a good first step in moving away from the axial-loaded compression model to an understanding of a tensegrity model.

VOILA! You have a tensegrity structure.

Certified Teacher of the Alexander Technique